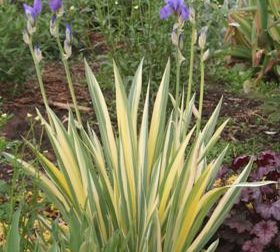 What is zebra iris?  Zebra iris (Iris pallida), also known as sweet iris, Dalmatian iris or variegated iris, is a very old garden plant.  It is native to rocky areas of northern Italy and the eastern Mediterranean including Dalmatia, a province of Croatia (hence one of the plant’s common names).  Zebra iris was one of the primary species used in the development of the tall bearded iris.  Dried zebra iris root (along with the roots of other species of iris) is a source of orris root powder.  This powder was used medicinally (and for its supposed magical and alchemical properties) in medieval times, as well as a perfume and potpourri fixative for many centuries.  Roots may require several years of drying before fully developing their fragrance.  Orris oil (derived from fresh roots) is used as a flavoring in soft drinks, candies and chewing gum.

Zebra iris produces low clumps of sword-like leaves that remain nearly evergreen in areas with mild winters, but die back to the ground in colder climates.  The original color of the foliage of this species was a solid bluish-green.  Newer cultivars of zebra iris have leaves with vertical stripes of blue-green and either silvery-white (varieties ‘Alba-variegata’ and ‘Argentea Variegata’) or creamy yellow to pale gold (varieties ‘Aurea-variegata’ and ‘Variegata’).

Zebra iris cultivars are grown primarily for their attractive striped leaves, although in early summer they do produce pretty, lavender-blue flowers with small, yellow beards on three-foot-tall scapes.  The tall branched flower stems may need staking in windy, exposed areas.  The highly fragrant flowers have a distinctive scent that has been variously described as reminiscent of grape jelly, orange blossom, or vanilla.  Zebra iris is hardy in zones 4 through 9.

Where do I get zebra iris?  Zebra iris plants can be puchased at local nurseries and garden centers.  Once established, clumps should be divided as needed every three to four years after flowering has occurred, just as you would a bearded iris.

Zebra iris has few pests.  Rabbits and deer rarely bother this plant and iris borer (see University of Garden Facts XHT1041) is much less of a problem than on bearded iris.

How do I use zebra iris most effectively in my garden?  The striking foliage of zebra iris makes a great accent in a sunny perennial border, especially near the front.  The stiff upright form of zebra iris offers good contrast to mounded shapes, while the dramatic coloring of striped varieties stands out among solid-colored foliage, particularly purple-leaved plants.  Interplant with low, open perennials or taller ramblers such as pincushion flower (Knautia macedonica).  Zebra iris also pairs nicely with traditional perennials such as fern leaf yarrow (Achillea ‘Moonshine’), purple coneflower (Echinacea spp.) and ‘Husker Red’ beard-tongue (Penstemon ‘Husker Red’), and is a good companion with Arkansas bluestar (Amsonia hubrechtii).  Or use zebra iris as a neat edging in larger plantings.  Zebra iris is a natural around water and really stands out in rock gardens.  It can also be stunning in suitable containers. 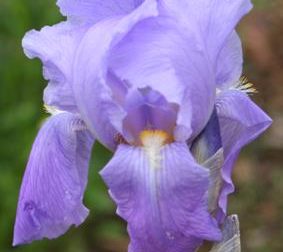