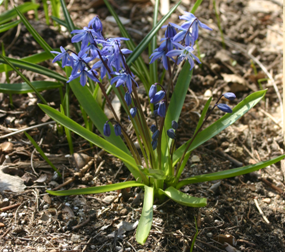 What is Siberian squill?  Siberian squill (Scilla sibirica) is a member of the lily family (Liliaceae) and one of the first of the spring-flowering bulbs to brighten the landscape in early spring.  It is one of more than 100 species in the genus Scilla that are native to Europe, Africa, and Asia.  While Siberian squill’s name suggests that the plant originated in Siberia, it actually is native to other areas of Russia and elsewhere in Eurasia.  Siberian squill has been cultivated since 1796, and is grown throughout USDA zones 2 to 8.

Siberian squill produces dark green, grass-like leaves that emerge from the ground in early spring.  Soon thereafter, one or more arching flower stalks (up to six inches in length) are produced from the center of the rosette of foliage.  Each flower stalk supports one to three nodding flowers of intense royal blue.  Individual flowers are up to an inch across, with six blue “petals” (technically three petals and three sepals) with a single dark blue vein running down the middle, and blue anthers (male reproductive structures).  Blossoms have a pleasant floral fragrance, and are attractive to bees and other pollinating insects. They last for approximately two to three weeks and are very tolerant of snow and freezing temperatures.  Fertilized flowers form green, bumpy, and roundish seed capsules.  As they mature, the capsules turn brown, eventually splitting to release numerous reddish-brown seeds.  By early summer, foliage of Siberian squill dies down, and the plants’ small round bulbs, covered in a loose dark tunic, remain dormant in the soil until the next spring.  Fortunately, Siberian squill is not a preferred food of voles, chipmunks, rabbits or deer.

Where do I get Siberian squill?  While Siberian squill spreads very easily by seed once established in a garden or landscape, this ornamental is best initially established by planting bulbs.  Select bulbs that are large, firm (not soft), and free of gashes and other blemishes.  Avoid bulbs showing any signs of fungal growth (e.g., colorful masses of spores) on their surfaces.

How do I grow Siberian squill?  Siberian squill does best in full to partial sun, in soils with good drainage and an abundance of organic matter.  In wet soils, crown and bulb rots can be a problem.  Plant bulbs in the fall, placing them two to three inches deep, and two to four inches apart.  Because of the ephemeral nature of Siberian squill foliage, this bulb can be grown easily in sunny lawns.  To plant Siberian squill in turf, scatter the bulbs randomly over the lawn.  Punch a hole in the sod, using an auger, dibble or other implement (e.g., a cordless drill with a large bit), wherever a bulb has fallen.  Place a bulb (pointed side up) at the bottom of each hole and fill the hole with soil.  Once plants have finished flowering in the spring, wait for the foliage to begin to die before mowing the lawn.  If you must use herbicides for weed control, do so in the fall (not the spring) when the bulbs are dormant.

How do I use Siberian squill most effectively in my garden?  Plant Siberian squill in masses (preferably approximately 20 bulbs per square foot) and loose drifts.  Some experts recommend never planting fewer than 100 bulbs.  Siberian squill can also be used throughout flowerbeds, along walkways and paths, in herb or rock gardens, and interspersed in perennial gardens.

Siberian squill mixes well with other early bloomers, such as giant crocus (Crocus vernus), yellow winter aconite (Eranthis hyemalis), snowdrops (Galanthus spp.) striped squill (Puschkinia libanitica), light blue glory-of-the-snow (Chionodoxa spp. – see University of Wisconsin Garden Facts XHT1169), early daffodils (Narcissus spp.), including ‘Tête-à-Tête’, ‘Jetfire’, and ‘Dutch Master’, early tulips (Tulipa spp.), and Virginia bluebells (Mertensia virginica).  Adding the blue of Siberian squill to a garden can cool and soften the effect of the bright and intense color of many tulips and daffodils.  If space is limited in a garden, Siberian squill bulbs can even be planted on top of deeper-planted spring bulbs such as daffodils and tulips.  Siberian squill can also be planted between later-emerging perennials such as ferns, hostas or Lamium where dying bulb foliage will be hidden by the perennials as they leaf out.

Although Siberian squill requires sun to thrive, it is particularly attractive when allowed to naturalize under deciduous trees and shrubs.  Leafless branches allow the bulbs ample exposure to the sun when they are actively growing.  By the time the trees and shrubs have leafed out, Siberian squill plants are starting to go, or have already gone, dormant and thus do not require as much light.  Keep in mind however that because Siberian squill so readily naturalizes, it may become invasive in some situations.

Finally, Siberian squill is one of the best squills for forcing.  See University of Wisconsin Garden Facts XHT1144 (“Forcing Bulbs”) for details on how to use this plant to brighten the indoors during the winter. 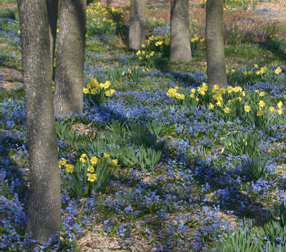 Siberian squill is spectacular when planted in large masses or drifts.