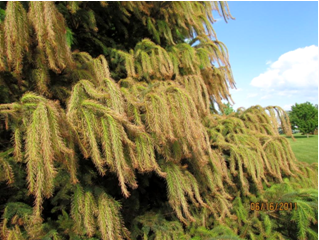 Homeowners and turfgrass managers have observed damage to certain tree and shrub species following spring applications of the new broadleaf turfgrass herbicide, Imprelis® (active ingredient aminocyclopyrachlor) from DuPont™. DuPont™ has released a statement to the turfgrass industry and distributors of Imprelis® informing them of the potential for damage to nontarget trees and shrubs. The trees affected generally show severe symptoms, however there are many locations where the product was used and no damage has occurred to surrounding trees. The current hypothesis is that herbicide drift and volatilization are only minor factors in the injury process. The product likely moves into the soil water and as the tree starts to put on new growth in the spring, the roots uptake the water from the soil to support the newly emerging leaves and needles, absorbing the herbicide along with it. The active ingredient in the herbicide is absorbed through foliage and roots, is translocated in the xylem, and accumulates in the meristematic regions (i.e. growing points) of the shoots and roots. The active ingredient has a 44 day half-life; a relatively long residual activity in the soil. It can affect tree roots far beyond a treeʼs dripline as tree roots often extend 3-5 times the height of the tree, thus damage can occur with application of the
product to lawns growing around or near trees.

What symptoms have been observed on trees and shrubs following Imprelis® application?
The symptoms resemble injury caused by a synthetic auxin-type herbicide. These include yellowing and browning of needles, twisting and curling of needles and tips of branches and eventual needle drop at the ends of the branches. On pines, the newly emerging “candles” (new growth) are affected. On deciduous, broad-leavedtrees, leaf cupping and twisting can occur as well as misshapen and smaller leaves with browning along the margins. Conifers such as spruce and pine can be affected at certain times of the year by insects and diseases, mimicking some of these
symptoms. Drought injury, in particular the browning and death of new shoots, can also resemble herbicide damage. This can occur on newly planted trees when improperly watered, or on established trees during a severe drought.

What can I do to help my trees and shrubs recover?
Trees usually recover from slight herbicide injury. Irrigating the trees during a drought as well as all newly planted material is imperative to help alleviate moisture stress. Use of soaker hose around the bases of trees is recommended, however, avoid flooding the surrounding soil with water as this may increase the risk of bringing additional herbicide into the soil solution where it could be taken up by tree roots. Fertilization of trees during times of pest and disease activity, drought, or herbicide injury will generally only exacerbate the problem; promoting new growth which can be more easily damaged. For lightly damaged plants, prune out the dead branch tips. If branch dieback occurs, delay pruning of entire branches until the extent of damage and potential development of new buds for next year can be better evaluated. For many trees, the next yearʼs vegetative and flowering buds are set in midsummer and mature during late summer and fall. Further decline of branches may continue into the next year and long-term severity of the damage is unknown. Complete tree removal is not necessarily recommended at this time. Avoid planting new evergreens and other trees, shrubs, and perennials into soil that was previously treated with Imprelis® during the same season. Do not compost or use as mulch any grass clippings from lawns treated with Imprelis®. Avoid planting evergreens after mid-October, as there is inadequate time to establish new roots before the ground freezes. Many late fall planted evergreens may show significant winter injury the following spring. Most deciduous trees can be planted in autumn without injury, though some species do not do well when dug from the field and planted in fall (oaks, birches, magnolias, hickories, etc.). Those species should be dug in spring and planted as soon as possible.

Where can I get more information in Wisconsin?
If damage from Imprelis® is suspected, please contact your lawn care provider, the Plant Disease
Diagnostic Clinic at UW-Madison (http://pddc.wisc.edu) or the Turfgrass Diagnostic Lab (http://www.tdl.wisc.edu).

Photos on page one courtesy of Lisa Therriault 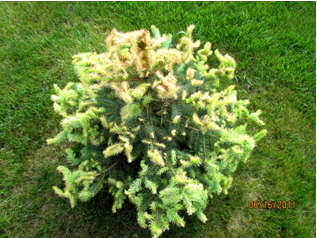 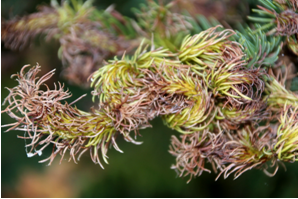 Close up of spruce tip with possible Imprellis damage